A package of properties that’s been marketed as the “last prime development opportunity in West Midtown” appears to have a taker.

CRG, the real estate investment and development arm of Chicago-based Clayco, is looking to break into the intown Atlanta market with a two-building 11th Street project that would replace longstanding restaurant Six Feet Under Pub and Fish House and other businesses, the Atlanta Business Chronicle reports.

CRG has filed for building permits to construct a mix of multifamily units, commercial spaces, and offices that would add to an influx of large-scale development that’s transformed the Howell Mill Road corridor and surrounding blocks in recent years.

Plans call for 344,900 square feet of residential uses in one building. The other would be a 277,000-square-foot stack of offices.

For context, the office building would be slightly smaller, in terms of square footage, than 287,000-square-foot Star Metals Offices next door. Nearby, Interlock’s phase-one office building totals about 200,000 square feet.

Also included in the mix would be 27,400 square feet of street-level retail. 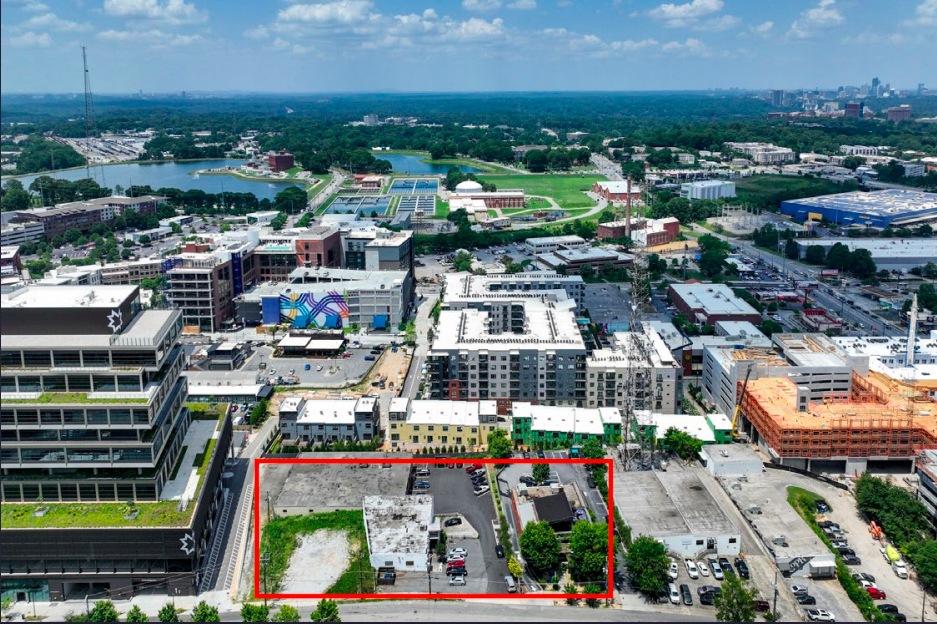 CRG is asking the city to rezone the site from industrial uses to one that allows for a blend of commercial and residential space, MRC-3. As the ABC notes, CRG is known for building student housing, so it’s possible the residential component would be devoted to students at nearby Georgia Tech.

Dotted with low-rise buildings, the site in question collectively spans about 1.7 acres, or 74,000 square feet, on 11th Street between the booming Howell Mill corridor and Northside Drive. It’s comprised of four contiguous parcels. 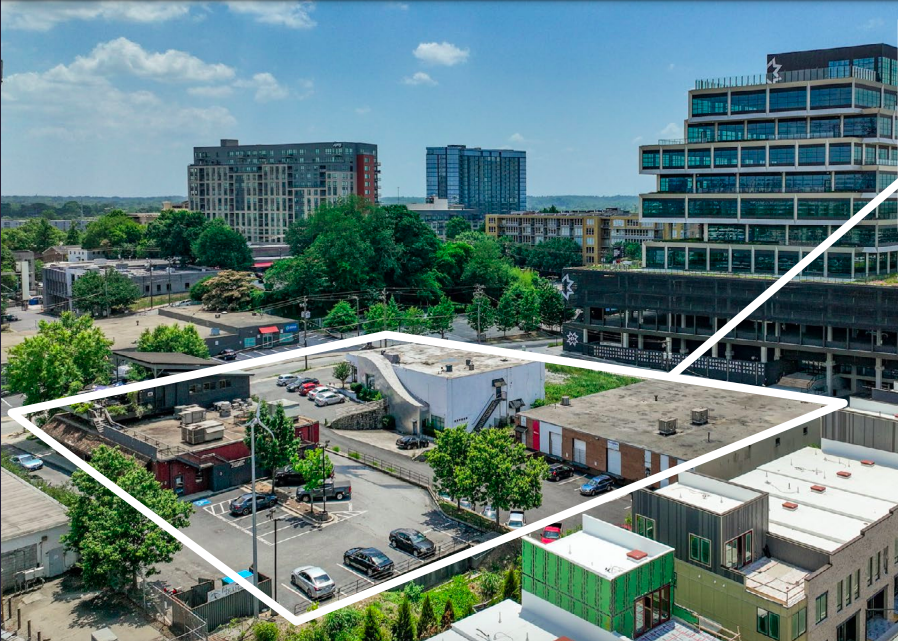 The Six Feet Under restaurant location, at bottom left, and other buildings on site, with a backdrop of recent development that’s claimed underutilized or vacant land. Courtesy of City Realty Advisors

Immediately to the west is the 15-story Star Metals Offices building, part of the Star Metals District that’s slated to expand, beginning next month, across properties just south of 11th Street, too.

The Interlock development, also currently expanding, has consumed acreage to the north.

CRG has yet to buy the land in question. The property is listed with City Realty Advisors, but an asking price hasn’t been specified.

Six Feet Under, a laidback restaurant and pub, originated in Grant Park and opened its 11th Street location near Georgia Tech about 15 years ago, but owners announced planslast year to relocate those operations to Cheshire Bridge Road, in the former ROXX Tavern. Property records indicate an LLC associated with Six Feet Under owns the 11th Street property, having paid $1.2 million for the loft-style building and adjacent parking in 2006.

Other businesses on site now include recording studio 11th Street Studios, a picture frame shop, and digital printing service Doc-Qmax. City Realty reps have previously said the other buildings are also owned by their users.

The developer behind the planned redevelopment of the Master Mind Thinker Building in Midtown Atlanta is headed before a neighborhood planning group with a new vision, one that no longer includes the office building with the thinker painted on its facade. Tenth Street Ventures plans to reduce the size of its planned mixed-use tower from 20 to 17 stories, push back its L-shaped project by 20 feet from the historic Winnwood Apartments, cut the number of residential units and, most prominently, raze the current 15K SF office building, known as the Master Mind Thinker Building. The plans were made public on the agenda for the Midtown Development Review Committee meeting Tuesday.

Tenth Street principal Brian McCarthy told Bisnow that the decision to tear down the existing office building came after hearing feedback from neighborhood and community members who didn’t feel the structure needed to be preserved in the redevelopment.

“They didn’t say that we should tear it down, but they said it wasn’t important to keep it,” McCarthy said.

Tenth Street previously planned to repurpose the Master Mind building, built in 1958 and renovated in 2001, into the new project at 1450 West Peachtree St. as its lobby and retail section. The developer was pursuing a variance in order to keep the existing office building, but now that it is to be torn down, that variance approval is no longer needed, McCarthy said.

The changes come after Tenth Street received neighborhood pushback on its initial design, including criticism from Atlanta Preservation Center Executive Director David Mitchell, who said last year that it would “besiege” the Winnwood Apartments, one of the last remaining buildings in Atlanta designed in a Georgian Revival style. Mitchell said the plan was “lamentable” for failing to focus on preservation and not involving more civic engagement.

“The style I was going for is not the style they were looking for,” McCarthy said.

Midtown Neighbors Association President Courtney Smith, who chairs the neighborhood planning unit where this project is located, declined to comment on the revisions made by Tenth Street.

“I am going to hold comment until after the revised plan presentation at the DRC tomorrow. Then we will be fully aware of the context for the new site plan,” Smith told Bisnow in an email. “This project will certainly receive extensive discussion. We have received a number of statements from community members and advocacy groups.” McCarthy said other changes to the project, plans for which were first reported by Bisnow, were done in consideration of the Winnwood Apartments, including reducing the height of the building, scaling back the number of residential units from 332 to 288 and shrinking the total size of the parking deck.

Winnwood is owned by Atlanta-based Urban Landings, a firm that formed in 2021 after four managing partners of Tenth Street left to partner with GBX and Easements Atlanta. Urban Landings plans to renovate the 90-year-old Winnwood property — listed on the National Register of Historic Places — into 50 affordable micro-apartments.

“From the concerns from the community, we redesigned the parking deck so it’s not as overwhelming,” he said. “Ultimately, trying to make it fit more what the community wanted.”

But McCarthy said in order to reduce the parking deck’s size, he now has to rely on a unique design — a deck with only one driveway, where monitors inform drivers who can go up or down at any given time.

“It’s going to be very technologically based where you have to go one car one at a time. We have the same amount of parking that we have before, but the architect was able to come up with this incredible concept,” McCarthy told Bisnow. “It’s like an HOV lane. People will be able to go one way at a time and pause each way they go down. Technologically, it’s 100% able to happen. It’s about the timing and when you move in and move out.”

McCarthy said that the smaller parking configuration shrinks the overall development cost from the initial $120M price tag to $100M.

Some 30% of the 139 residential units are expected to be reserved for renters earning up to 80% of area median income, which is around $48,300 for one person, according to Invest Atlanta. McCarthy said the building will still have a coworking space, a fitness center and a café. The developer also is maintaining the 149 hotel/short-term rental units in the project, according to the agenda.

Tenth Street heads before the review committee at 5 p.m. Tuesday.