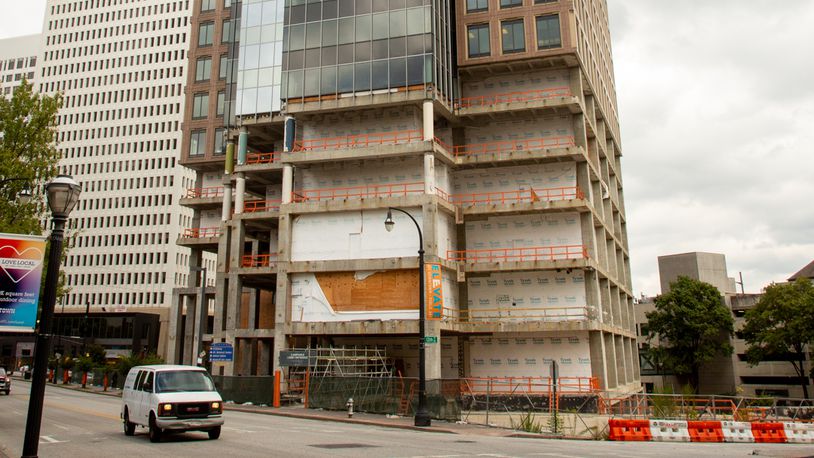 The renovation of the Campanile office tower, at 1155 Peachtree St., has been stalled for about two years, and the neglect is starting to show. Weeds grow through a chain link fence. Sheets of protective plastic wrap are peeling off the building’s exterior.

Meanwhile, across 14th Street, a $400 million renovation of Colony Square was completed this summer. Across Peachtree Street, the 1980s office building that will soon house the credit card network Visa recently underwent a facelift.

Campanile’s owner, John Dewberry, has ambitious plans for the office tower that include encasing the building in new marble, creating a penthouse office suite and expanding floor space by 50%, to 665,000 square feet. And his company has been awarded millions of dollars in tax breaks to help him accomplish that. But the project has hit financial snags along the way, delaying its completion.

A $186 million loan secured by the Campanile tower was recently sold as “non-performing,” meaning the lender considered the loan in distress. Liens piled up as the project came to a halt. The city of Atlanta filed a complaint labeling the renovation “abandoned.”

The pandemic has brought a new set of challenges, as well. Landlords like Dewberry face a market with soft demand and an oversupply of vacant offices. Many companies are reconsidering office space as more employees spend at least part of their week working remotely.

“Once we’re through, I think 14th and Peachtree Street is really going to be ground zero of Atlanta,” he said in an interview. 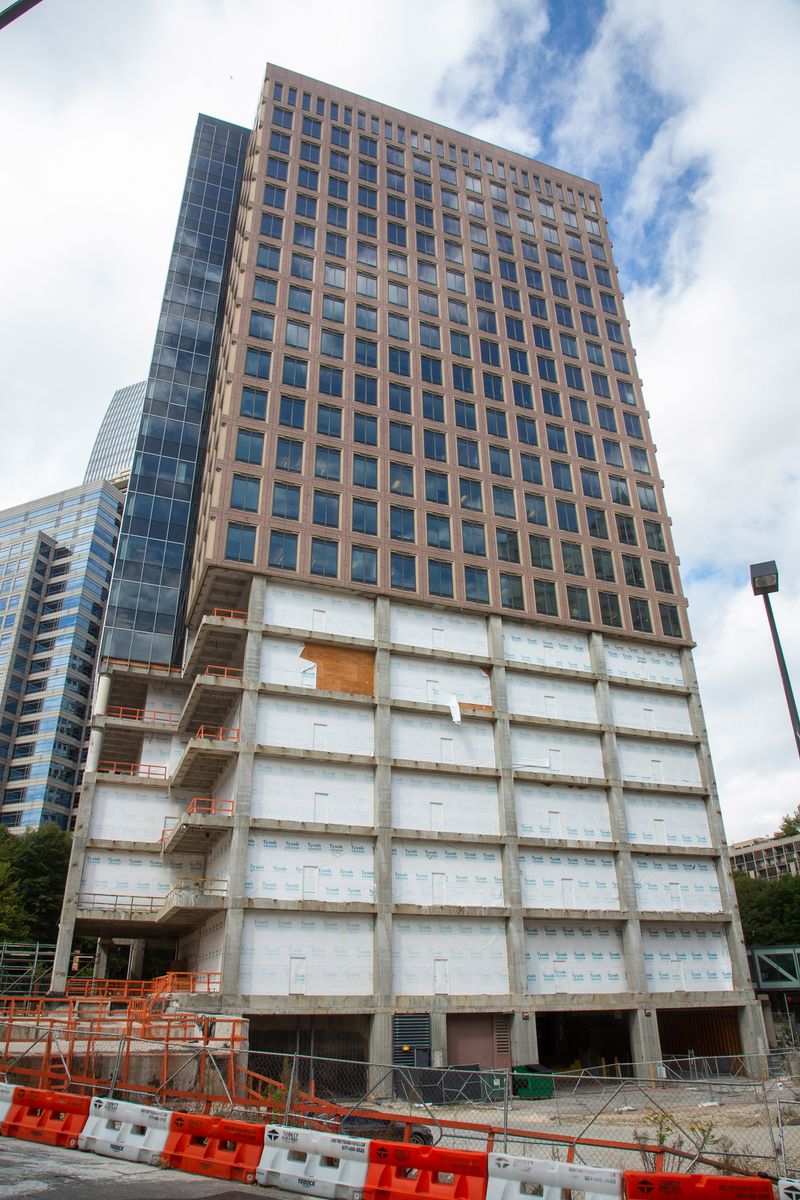 Dewberry insists everything is in order and says construction will resume soon, perhaps by Christmas.

A work shutdown at a major intersection is enough to garner attention on its own. When it involves a developer whose outsized personality attracts both flattering and unflattering descriptions, it’s even more notable.

A 2017 Bloomberg article called Dewberry the “emperor of empty lots” for his unwillingness to develop valuable parcelson Peachtree Street. He owns about 1.7 million square feet of office, retail and hospitality properties in metro Atlanta, according to data provider CoStar.

Things started well at the Campanile. Dewberry bought the largely empty building at a discount, for $36 million in 2010, with plans to renovate. About three years later, the Development Authority of Fulton County (DAFC) granted a tax break estimated by The Atlanta Journal-Constitution to be worth about $3 million. The DAFC justified the incentive because Dewberry’s plan could lure employers and jobs.

But that initial project failed to gain traction with would-be tenants, and Campanile remained about half-empty, according to a DAFC document from 2017. So Dewberry returned with a grander proposal.

That November, the DAFC board unanimously approved a new tax break replacing the 2013 agreement. DAFC did not publish estimated values of its tax breaks at the time, but the AJC estimates the 2017 deal could be worth about $5.7 million over a decade. In return, Dewberry promised an $88 million renovation, adding four floors of office space and street-front retail.

“The project is expected to result in approximately 1,319 new office jobs and 46 new retail jobs,” according to the DAFC meeting agenda. It’s unclear how those job estimates were determined.

It may seem counterintuitive to put so much work into a 1987 office building, but it’s based on sound reasoning, said Keith Pierce, vice president of research at brokerage Transwestern. Older buildings have a difficult time competing with brand-new products. 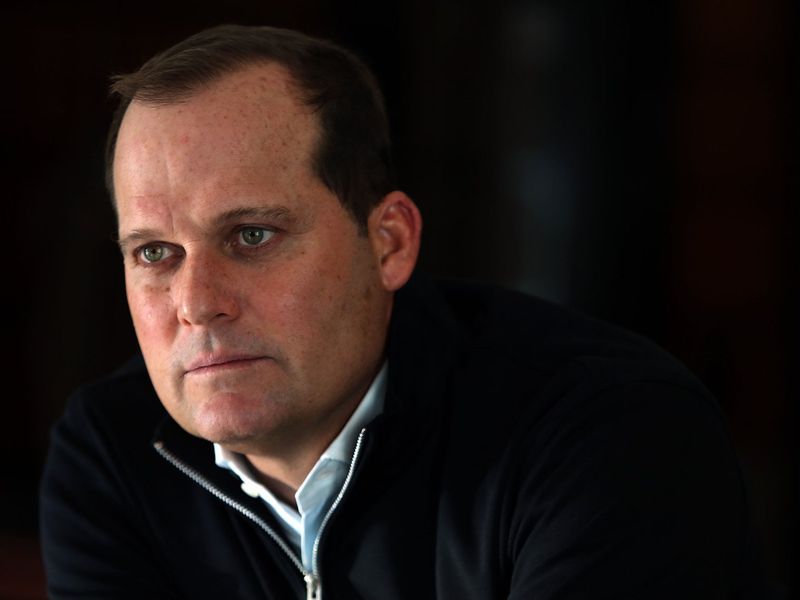 In the 11 years Dewberry Capital has controlled Campanile, tech corporations that pay a premium for office space have flocked to Midtown, including Google, Microsoft and Cisco. Law firms like Jones Day are also courted to relocate to the newest buildings.

Even during the pandemic, Midtown has been a bright spot in the overall mixed picture of metro Atlanta’s office market.

Over the decade as the Midtown market heated up, Campanile landed Pandora and Northwestern Mutual insurance as tenants, but otherwise missed the wave. It’s currently about 44% occupied, according to Avison Young.

“That entrance is still a mess. For a prospective tenant, that’s a turnoff,” said Henry Lorber, a distressed real estate expert. “You also have vicious competition going on from all the other offices in the area.”

Dewberry predicts that Campanile will soon join the ranks of Midtown’s trophy office towers and will be able to attract top-shelf tenants. But, he said, it’s taken longer than he expected.

“It’s been a bit painful, and I apologize to all the folks that it looks like it does,” Dewberry said.

He said he’s resolved the abandoned project complaint. A spokeswoman with the city said the department continues to look into the matter.

Delays are part of the development game, Dewberry said. The mid-century building he bought in Charleston, S.C., in 2008 to make into his namesake hotel took eight years to renovate, but it has since claimed numerous awards, including a spot on Tripadvisor’s top 25 U.S. luxury hotels.

Dewberry said Campanile’s delays were caused by several factors, including a disagreement over price estimates with the former general contractor.

Delays can lead to financial problems, depending on the terms of agreements between a lender and borrower, said Nellie Shipley Sullivan, a commercial real estate attorney at Womble Bond Dickinson who’s not involved in the project. Some loans will place a borrower in default if construction stops for an extended period, she said.

“We have never been a penny short or a second late” on a loan payment, he said.

Privately owned Dewberry Group isn’t required to disclose financial details on a project. But a few red flags have appeared.

The Campanile loan was sold in August to a California-based investor that specializes in distressed debt. Dewberry said he doesn’t know why the loan was classified as distressed since he’s never made a late payment.

Liens or construction delays can lead a lender to classify a loan as non-performing, experts say. 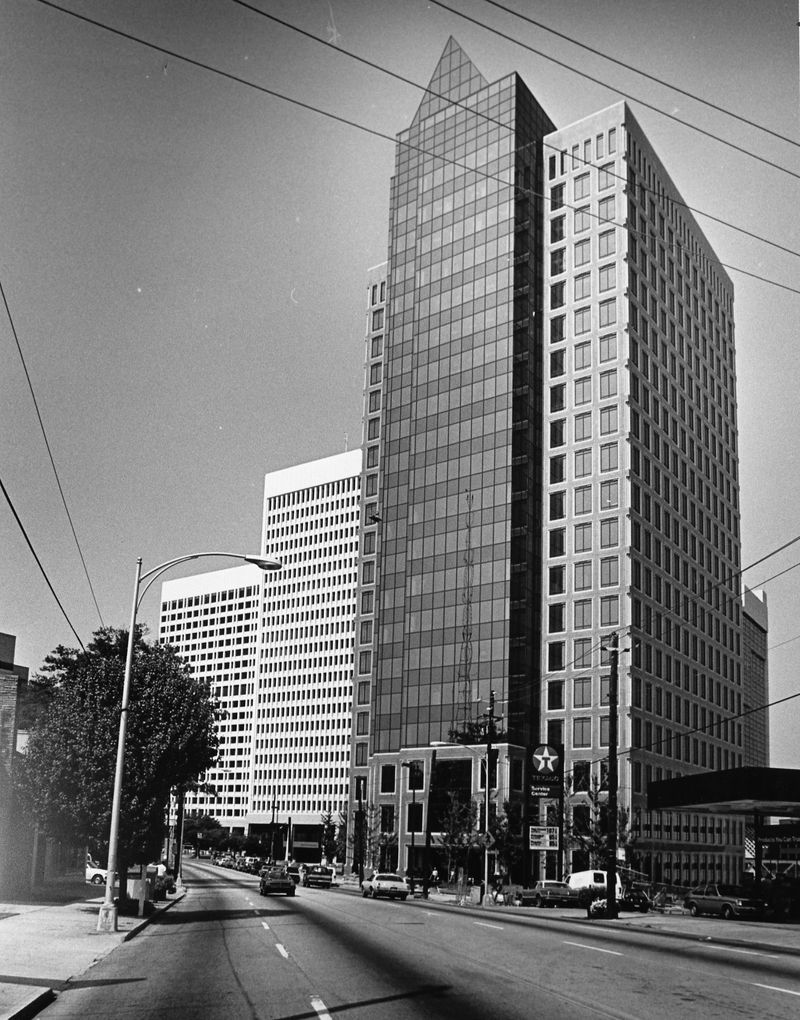 Some lenders might choose to sell their interests in a commercial loan deemed “non-performing” at a small loss because of doubts about the borrower’s ability to repay the loan. Some might run out of patience with the borrower and sell the loan.

The Campanile loan purchaser, Dornin Investment Group, and a seller, H.I.G. Realty Partners, did not respond to requests for comment. The other seller, Square Mile Capital, declined to comment through a spokesman.

The Campanile project has hit other potholes. In late 2020, at least nine liens were filed against Dewberry Group by Campanile subcontractors, according to Fulton County court records. The vendors, including concrete supplier Ready Made and heavy-equipment distributor Sunbelt Rentals, claimed that Dewberry owed a total of about $1.6 million.

In January and February, Dewberry paid all the subcontractors but one, and the liens were withdrawn.

The final lien, for about $163,000, was filed by general contractor Gay Construction. A notice of withdrawal or cancellation of the lien has not been filed in Fulton County court.

Gay Construction’s lien was a dispute over the final estimated cost, Dewberry said. Although he initially agreed to the estimate, the amount of which he declined to disclose, Dewberry said he later realized it was too expensive.

The COVID-19 virus played a role in the renovation delay. After parting ways with Gay Construction as the general contractor, Dewberry tapped himself as general contractor in partnership with British architectural engineer Gary O’Connor.

Dewberry picked O’Connor because he developed a new method of attaching stone to a building’s exterior that’s not as heavy as traditional methods. But he was delayed for months from entering the U.S. due to COVID-19 restrictions, which have since expired.

Dewberry continues to plan for restarting construction. He’s decided to use marble on the Campanile’s exterior that comes from the same quarry used for The Dewberry hotel in Charleston.

“I’m probably the only fool on the planet to do what we’re doing,” he said.

Revised architectural plans will be filed with the city early next year. Construction will resume, pending delivery of half a disassembled crane he recently purchased.

But there’s a delay. One half of the crane is in Texas, and he’s waiting for it to be delivered.

“We bought the crane ourselves,” Dewberry said. “Now I own it.”

By Andy Peters – The Atlanta Journal-Constitution