Two historic Episcopal churches in Atlanta, which combined control more than 8 acres of prime Midtown land, are mulling the redevelopment of their land as its property value soars. 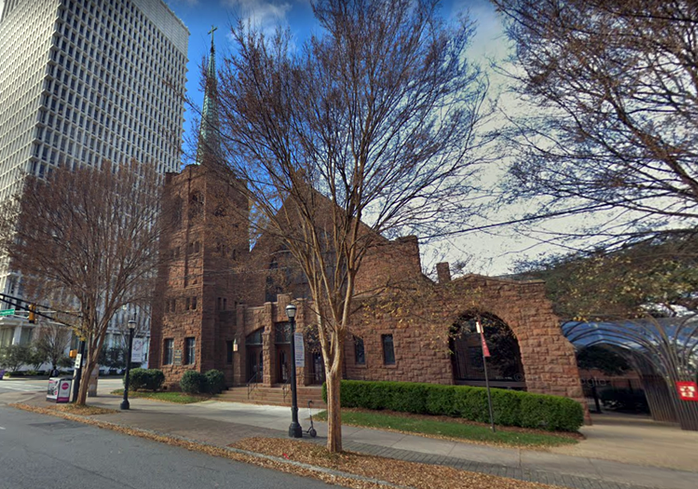 Leaders of All Saints Episcopal Church off West Peachtree Street and Saint Luke’s Episcopal Church off Peachtree Street are evaluating potential redevelopments of sections of their church land into mixed-use projects with private developers. After acquiring the rest of its block, a string of aging retail spaces across from The Varsity sandwiched between West Peachtree and Spring streets in Midtown, in 2015, All Saints convened a committee of prominent parishioners to study what to do next, including the possibility of building housing or a mix of uses. “Developers are calling us more. But developers are looking for land that is able to be built in high density,” Emory University Candler School of Theology professor Lang Lowrey said. Lowrey is also an ordained Episcopal priest, a member of the All Saints committee and regularly consults with other Episcopal churches across the country on real estate issues. All Saints and Saint Luke’s, which sits a block from the Emory University Midtown Hospital, are just the latest churches in the heart of a major city finding themselves on a virtual gold mine as major cities across the nation experience an urban renaissance.

Midtown Atlanta has especially been the target of developer lust as residents and corporations flock back to its confines. Next to All Saints, Norfolk Southern is constructing its new global headquarters and the owners of The Varsity have been evaluating potential redevelopment plays for their property. Bull Realty founder Michael Bull said the continued development in Atlanta has helped to inflate land values in its three prime submarkets: Midtown, Buckhead and Downtown. That has forced many churches to consider what to do with the dirt they sit on.

Today, an acre of land in Midtown averages north of $10M, Marcus & Millichap Senior Director Paul Johnson said. A decade ago, that price tag would have been less than half that much. “All of it comes because these people are building 20- to 40-story products,” Johnson said. 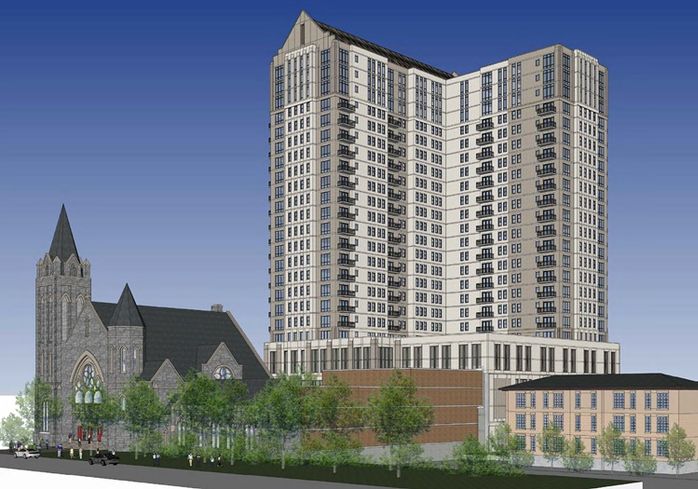 Recently, Saint Marks United Methodist Church in Atlanta sold a portion of its campus to StreetLights Residential to develop a high-rise apartment tower that will loom over the historic church. In 2013, Friendship Baptist Church parishioners agreed to sell their historic church on Mitchell Street for nearly $20M to the Atlanta Falcons, which used the land to develop Mercedes-Benz Stadium. In turn, the church developed a new facility just two blocks away.

“If you’re sitting on several million dollars of equity that you could trade … and have millions to help people, then why shouldn’t you do it?” Bull said. Justifications for redeveloping urban church properties can vary. For Saint Marks, the agreement with StreetLights was simply for parking, Senior Pastor Beth Lorocca-Pitts said. “Originally we had purchased the parcels behind us with the intent of putting in a surface parking lot,” Lorocca-Pitts said. “One of the things that kills an intown church is not having the parking on a Sunday.” After purchasing the parcel for $1.3M, church leaders soon discovered that Atlanta prohibited surface parking on that lot. Any deck parking would cost in the millions of dollars, so getting that critical extra parking space was out of reach without the help of a private developer, she said. But selling underused land or an entire church itself is never an easy decision for a congregation. Sometimes, these explorations lead to a conclusion by congregations to do nothing at all, despite the underlying values of their land. That was the case with Wieuca Road Baptist Church in Buckhead in 2016. For a year, church leaders considered selling their building and the 4.6 acres it sits upon, sandwiched between 3630 Peachtree and Phipps Plaza, for what would have been a big payday. But ultimately, the church — then led by Mark Wilbanks — voted to stay put where it has been since 1956. “I mean, people have been calling us for years to say, ‘Hey we want to buy your back parking lot,’” Lorocca-Pitts said. “It’s never interesting to a church unless there’s some reason that will benefit them.”

For Saint Marks, that benefit is clear. StreetLights is reserving 150 of the 568-space parking deck for church use. For All Saints, the church is creating an alternative revenue stream as younger generations of churchgoers tend to be less generous with their tithing, Lowrey said. Baby boomers and church elders make up 10% of churches’ tithing (giving at least 10% of one’s income) versus 3% for Generation Xers and 2% for millennials, according to a 2017 Barna Group report. That is forcing churches to come up with other ways to raise capital. “We also believe now … you need other sources of income. That’s why people are looking back to the real estate,” Lowrey said. “I just don’t think the millennials have the money that the baby boomers have. So there’s a need for alternative sources of income.”

The Episcopal Church has taken this tactic elsewhere, including with Cathedral Church Saint John the Divine in New York City, which sold a portion of its land to Brodsky Organization. The developer built Enclave at the Cathedral, a 15-story apartment tower next door to the 120-plus-year-old church. Episcopal churches in Pasadena, California, Miami and Nashville have also partnered with private developers for various commercial developments on church-owned properties, Lowrey said. Officials with the Episcopal Church said they are not looking to sell the land holdings themselves, but instead enter into long-term land leases with developers, giving the church some control over the vision and use of those properties. “You got to balance the excitement of the real estate play with sort of the mission of the institution,” said Diversified Trust principal Michael Gragnani, who also is a member of the All Saints planning committee.

Church leaders are studying the trends shaping Midtown overall and how they can fit into that mix, both from a commercial perspective — such as fitting Saint Luke’s property into the proposed park over the interstate in Downtown — and from a mission perspective, including speaking with various nonprofit organizations on what the area’s greatest needs are, All Saints Rector Simon Mainwaring said. “I certainly think that a question of housing is one of the questions we should look deeply,” he said. All Saints has various programs already, including a small amount of housing for those recovering from drug addiction and the homeless. Mainwaring said with commercial development, there will likely be some social awareness aspect to the projects. For instance, the church could require multifamily developers to build affordable or workforce housing, or at least units small enough to be affordable to nurses and staff who work at Emory’s hospital. The committee is expected to study the potential uses of its land at both parishes and come up with a potential master development plan by 2021. “We’re finding ourselves in this great location at a time and place and at the heart of our mission as a church,” Mainwaring said. “We have a phrase that describes it for us: It is in the city and for the city.”