As a nonprofit, the law school will begin to fundraise. The initial aim is to increase scholarships to make John Marshall “more affordable to the population we want to serve,” said Dean Jace Gatewood. 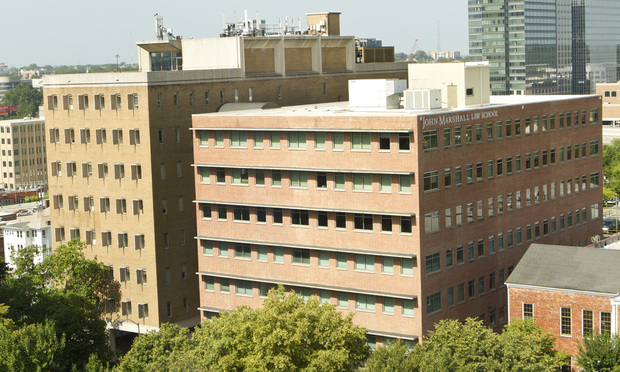 Atlanta’s John Marshall Law School started off the new year with nonprofit status, furthering its goal of providing legal education to nontraditional students and those from underserved communities.

John Marshall is the only one of Georgia’s five law schools that is independent and unaffiliated with a university. Until Jan. 1, when its 501(c)(3) status took effect, it was the state’s only for-profit law school.

With the nonprofit status, announced this week, fundraising will become an important part of the law school’s business model. The initial aim is to raise money for scholarships to make John Marshall “more affordable to the population we want to serve,” said John Marshall Dean Jace Gatewood in an interview, and to start legal clinics and other educational programs.

“We’re a school of opportunity, so 501(c)(3) status helps us serve our mission better,” Gatewood said. “We consider ourselves a community asset. We cater to a different student.”

John Marshall has one of the most diverse student bodies in the country, Gatewood said, with 60% racial minorities and 65% women. “Many come from underserved communities and after graduation, our lawyers often go back to those communities,” he said.

In addition to a traditional three-year program, John Marshall offers a part-time evening track for older students who attend law school while working and supporting families.

About one-third of the school’s 300 students are evening students on the 4L track. The only other law school in Georgia offering a part-time option is Georgia State University College of Law, but its evening program is not as extensive.

About one-third of the school’s 300 students are evening students on the 4L track. The only other law school in Georgia offering a part-time option is Georgia State University College of Law, but its evening program is not as extensive.

Gaining nonprofit status was several years in the making, starting with getting buy-in from faculty and students, Gatewood said. The ABA approved John Marshall’s conversion to nonprofit status in 2019, but final approval from the Department of Education was delayed last year due to the COVID-19 pandemic.

For fundraising, the law school is starting with its alumni base of more than 5,000 graduates.

“We have not appealed to alumni for donations before because we did not have a nonprofit entity for them to contribute to. Now we have the mechanism,” Gatewood told the Daily Report in October when John Marshall formed a nonprofit scholarship foundation ahead of obtaining nonprofit status. The foundation provides need-based scholarships to students with financial hardship, separate from existing tuition assistance based on their academic credentials.

Now that the law school is a nonprofit, the dean hopes alumni will be more inclined to contribute, since they “know their dollars are going directly to the students and the mission of the law school.”

Clinics are important, Gatewood said, because they offer law students hands-on learning, but they are also expensive, because of the low student-to-faculty ratio.

John Marshall does not have any in-house law clinics right now, the dean said, so its students use internships and externships to gain experience working with actual client matters.

Markovitz’s company, Argosy Education Group, took over John Marshall in 1999 at a time when it was facing a critical juncture as one of Atlanta’s three remaining night law schools.

The Georgia Supreme Court had decreed that all law schools in the state must become accredited by the American Bar Association or lose Georgia accreditation, which would mean shutting down. Atlanta’s other two night law schools, Atlanta Law School and Woodrow Wilson College of Law, ended up closing.

Markovitz took Argosy Education Group public in 1999, but in 2001 he bought back John Marshall from Argosy. With an infusion of capital and new management from Markovitz, the law school achieved ABA accreditation in 2005. At the time, it was one of only three independent law schools in the country to be ABA-accredited and the only one that was for-profit.

Markovitz has donated his equity and ownership interest in the school to a newly created Georgia nonprofit, Atlanta Law Center, that now operates Atlanta’s John Marshall Law School, effectively giving back the law school’s assets to the law school.

“John Marshall Law School was founded in 1933 as a nonprofit institution with the specific mission of providing legal education for those underserved by the then-existing establishment. That mission has continued uninterrupted to this day,” Markovitz said in an announcement.

“I am now delighted that my initial goals have been realized and the law school can once again become a true community asset, functioning as a fully qualified 501(c)(3) able to accept charitable gifts and donations in furtherance of its mission,” Markovitz said.

Link to Article in Daily Report.