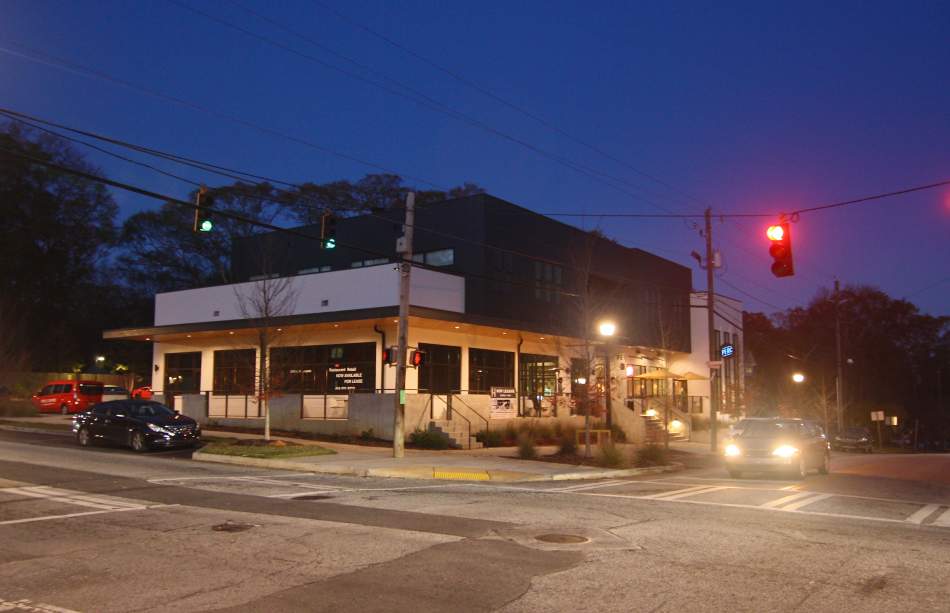 Townhouse prices at Hosea + 2nd will start in mid-$500Ks, as a brewery also comes together

Over the past five years, a moribund intersection of vacant buildings and empty lots in East Lake has evolved into Hosea + 2nd, an award-winning hub of mixed uses that functions as the historic neighborhood’s main commercial village.

The one missing component at Hosea + 2nd is housing, but that’s quickly changing.

Seasoned Atlanta homebuilder JackBilt is plowing ahead with 20 townhomes that will constitute the final component of Hosea + 2nd, taking the southwest corner where Hosea Williams Drive meets Second Avenue.

Zampell says the first phase of 10 homes should go vertical soon, potentially opening by this summer.

All will be four stories, spanning from 2,000 to 2,200 square feet with garages and rooftop outdoor patios with fireplaces. Each will have three bedrooms and three and ½ bathrooms, with an optional half-bathroom on the roof, plus heated indoor lounges with wet bars that can function as flex spaces.

Prices at ELL Square will start in the mid-$500,000s, Zampell says. Renderings are still being finalized.

Zampell says about a dozen townhomes will have elevator options. Planned communal amenities include a dog park and a central courtyard “square” with a lawn, firepit, and seating.

JackBilt purchased the last undeveloped Hosea + 2nd quadrant from the owners of Fellini’s Pizza and La Fonda restaurants, Clay Harper and Mike Nelson. Those business partners had bought the four East Lake corners in 2015 from the Cousins Family Foundation, an organization that’s garnered national attention for its work to revitalize East Lake since 1993. Intown neighborhoods from Morningside and Virginia-Highland to Old Fourth Ward and Kirkwood are dotted with examples of JackBilt’s single-family homes and townhome communities.

The townhomes aren’t the only buildout afoot at Hosea + 2nd, where all other phases are structurally complete.

The final available retail space—2,300 square feet with an 800-square-foot wraparound patio—has been claimed by Hippin’ Hops Brewery and Oyster Bar, which is set to be one of Georgia’s first Black-owned breweries with locations in East Atlanta and East Lake this year.

Jay Martin of ReDevStudio, the developer of Hosea + 2nd’s first two phases, says the brewery concept requires a full buildout but should open sometime this summer.

A Mexican taqueria concept originally slated for the space “ultimately was unable to open its first brick and mortar location” as a result of the COVID-19 pandemic, Martin says.

“Our other tenants are doing well through very challenging times,” says Marin. “We’ve obviously tried to do everything we can to help them.”

Those tenants include restaurants Poor Hendrix, Mix’D Up Burgers, Perc Coffee Roasters, Japanese-Korean restaurant Salaryman, and Lake & Oak BBQ, where the brisket in particular has been changing lives since last summer.

Rounding out the roster is Cameo, a hair salon, and the offices of Purpose Built Communities, a national nonprofit founded by developer Tom Cousins and chaired by former Atlanta Mayor Shirley Franklin.

In 2017, Hosea + 2nd won the Atlanta Urban Design Commission’s Award of Excellence for contributions to the city’s urban fabric. It was also a finalist for an American Institute of Architects (Georgia) design and honor award for renovation/restoration that year.

Article by Josh Green at Urbanize.City/Atlanta