Atlanta loft office developer Parkside Partners is planning an $8 million modernization of an aging low-rise building along West Peachtree Street — the latest in a series of “adaptive reuse” projects sweeping across Midtown. The building is overshadowed by Midtown’s gleaming office towers and newly repositioned mixed-use projects such as Atlantic Station. 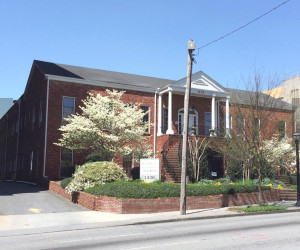 But, the property’s obscurity compared with higher-profile undeveloped sites such as the Symphony Center tract near the Four Seasons Hotel Atlanta is also part of what makes 1438 West Peachtree attractive, developers say.

A few blocks south, Parkside Partners is already planning a similar adaptive reuse project of a building at 16th Street next to the former Trump Towers site. That $12 million overhaul will be called 16th Station.

The goal of both projects: provide creative office space in high demand from firms that want to be in Midtown, near MARTA, Georgia Tech and amenities such as Piedmont Park and the Atlanta Beltline, said Parkside’s Eli Green.

Parkside isn’t alone in scouring Midtown for diamonds in the rough. Atlanta real estate company Carter is remaking Midtown’s former J.C. Penney Co. regional headquarters building into a hub for co-working space and fledgling technology companies. Carter, in a joint venture with private equity firm Pacific Coast Capital Partners, already has at least one undisclosed tenant signed to a lease in the 10-story building just north of the Fox Theatre, the Georgian Terrace hotel and Hotel Indigo at 715 Peachtree St.

Matt Delicata, a vice president with Carter, said loft-office projects such as 715 Peachtree increase competition for landlords of traditional Midtown high-rise towers. “There is more out there for tenants to choose from,” he said.

More adaptive reuse projects are being launched as the construction of new office towers without an anchor tenant remains difficult for some developers, said Josh Hirsh, a senior managing director with real estate services giant Jones Lang LaSalle Inc. Premium Midtown land prices caused by multifamily projects is one hurdle, he said. Prices have climbed to at least $8 million an acre across parts of Midtown. Soaring construction costs is another challenge for developers, he added. For example, the cost to build a new trophy intown office building has risen to slightly more than $400 a foot. By contrast, Carter is redeveloping 715 Peachtree for about half as much.

“It’s all about attracting young talent,” said Ben Hautt, co-managing partner with Stream Realty’s Atlanta office. Stream has adaptive reuse projects in West Midtown on Ellsworth Industrial Drive and in Brookhaven. “The young talent companies want is drawn to adaptive reuse projects because they provide a unique experience,” he said. “They don’t want to ride up an elevator to an office where they work in a cubicle. They have a huge desire for uniqueness.”

Parkside is striving for that at 1438 West Peachtree. Architect MSTSD Inc. is designing the project, which will include up to 14-foot ceilings and skylights on the second floor. The building, which will be 80 percent leased when Payscape takes occupancy this fall, will feature the remaining loft office space as an alternative to the glass towers on Peachtree Street, Parkside Partners said.

Demand for creative loft office space doesn’t appear to be waning, either. “Given the growth in Midtown multifamily development that caters toward young professionals, you are going to see this trend continue for a while,” Hirsh said.