One of Atlanta’s founding real estate families has bought one of the city’s most popular bars. Selig Enterprises has purchased the retail center occupied by Smith’s Olde Bar for more than $3M, according to Databank. 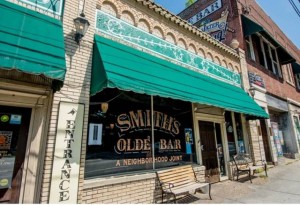 The property, called Morningside Strip Center, consists of nearly 18k SF of retail and another 27,400 SF of land, and has been owned by the estate of Beverly Taylor for more than 90 years. City Realty Advisors’ Tim Holdroyd brokered the sale. “We already have a substantial investment in the area, including Ansley Mall and Ansley II, and this seemed like a natural fit,” Selig CEO Steve Selig says in an emailed statement to us. The center made headlines earlier this year when it was put up for sale, casting a cloud of uncertainty over the fate of the popular Atlanta music venue on the northwest corner of Piedmont Avenue and Monroe Drive. Sources say the owners of Smith’s have signed a short-term renewal. Steve tells us, “Our plan is to improve the premises, work with the owners of Smith’s Olde Bar and lease the balance of the property.” Calls to the Smith’s owners were not returned as of press time. For Selig, the buy represents an opportunity to redo a portion of a prime Atlanta corner just across from Ansley Mall into an urban retail or entertainment complex.