Parkside Partners, known for its loft office projects across Atlanta, plans a $12 million overhaul of a forgotten 3-story building on West Peachtree Street — which happens to sit amid nearly $1 billion worth of planned development. Parkside Partners has reached an agreement with the building’s owner, Providence Bank, to buy and redevelop the property, which stands at the corner of West Peachtree and 16th Street next to the former Trump Towers site. 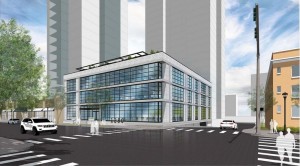 Parkside Partners will call the project 16th Station, and renovations would begin once the developer lands a tenant to anchor the 40,000-square-foot building. The redesign, led by architect MSTSD Inc., would aim for a building with a character and feel like those in the Westside Provisions District.

Parkside Partners joins other developers embracing the adaptive reuse trend, as what vacant land remains within the intown Atlanta neighborhoods continues to climb back to pre-Recession prices, and construction costs for new buildings soar well over $400 a foot. Rents in existing trophy buildings, meanwhile, are rising to some of the highest levels in years, forcing more tenants to consider less expensive alternatives.

Parkside also likes all the projects planned on the northern end of West Peachtree. Consider that MARTA is seeking developers for its mixed-use project at Arts Center station, at 15th and West Peachtree. Nearby, MetLife has assembled more than eight where it’s planning a large mixed-use development. Next door to 16th Station, AMLI Residential is developing a tower on a 1.8-acre site at 15th and West Peachtree Streets. And, several transportation improvements are also in the works, including converting West Peachtree into a two-way street, which could turn the corridor into less of a thoroughfare and create the opportunity for more street-level retail.