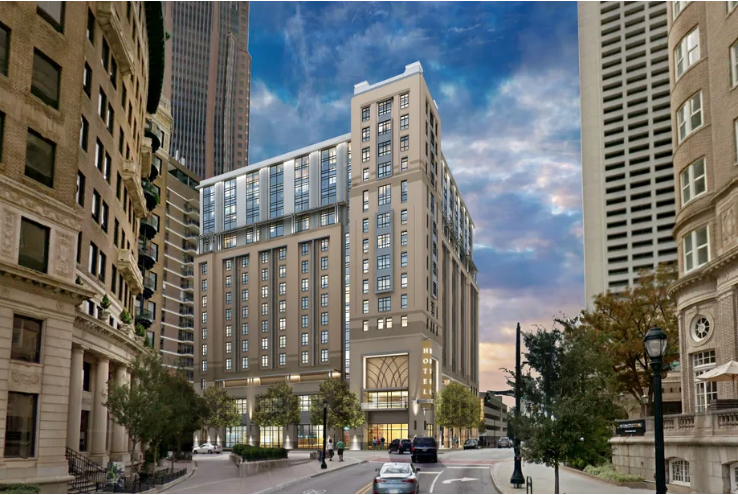 Last year, Atlanta planning leaders and rapt urbanists cheered as the developer of a planned hotel abandoned a flavorless design for something that better gels with Midtown’s historic aesthetic near the Fox Theatre. After a three-month (re)design process spearheaded by City of Atlanta Planning Commissioner Tim Keane, officials with developer Noble Investment Group had reworked plans for a 14-story, dual-branded hotel that all parties involved believe is a better fit. Today, construction launches on the 282-key hotel, which will rise on a parking lot at the corner of Midtown’s Peachtree Street and Ponce de Leon Avenue, Noble officials tell Curbed Atlanta.

The project, designed by Charleston-based LS3P Associates Ltd., shares the intersection with a host of historic Atlanta structures, including The Fox Theatre, The Georgian Terrace hotel, and the Ponce Condominium building—three early 20th century landmarks. The upgraded hotel design, according to Keane, integrates much better with its neighbors than the bland mockup Noble was asked to change in January 2018.

“It is critically important that Atlanta expect more from its designers and more of its buildings,” Keane said last year, in a prepared statement. “City Planning is focused on design at every scale, so we can make a more vibrant public realm in Atlanta. Buildings are essential to this.”

The hotel is slated to feature 154 rooms under the Marriott Courtyard Flag, as well as 128 more in its Marriott Element section. The nearly 300 rooms would be stacked above a five-story parking deck. The hotel project also plans to introduce a new bar and restaurant to the bustling area. A Noble spokesperson told Curbed the project is expected to deliver by mid-2021.

This story was updated to include the name of the architecture firm behind the revised design.