Some contend the prominent signs were illegally permitted decades ago 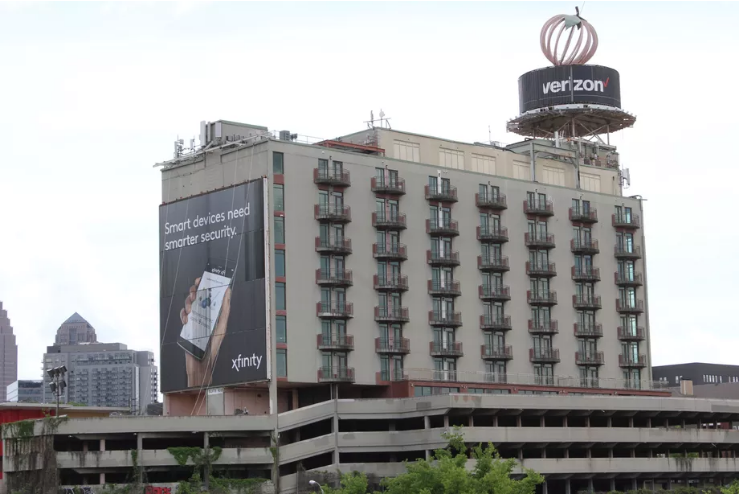 An effort to digitize two of Atlanta’s most prominent billboards has been met with a legal challenge.

In February, the City of Atlanta’s Office of Buildings issued permits that would allow Tazmedia Group, which owns the massive advertising signs on the side and top of a 1960s office building at 1655 Peachtree Street, to upgrade the billboards to digital changing-message signs.

The Trivision billboards, which adorn the same building as a recognizable metal peach, are marketed by the owner as the “world’s largest,” passed by hundreds of thousands of commuters daily on Interstate 85.

But a few parties who could be impacted by the potential glow of the gigantic signage are calling foul.

The Hebrew Benevolent Congregation—best known as The Temple—Hament Desai, and Selig Enterprises are appealing the city’s Board of Zoning Adjustment to invalidate Tazmedia’s permits, arguing that the signs are illegal now.

“They did not comply with the ordinance, they were illegally permitted, they exceed the allowed sign sizes by several multiples, and they are general-advertising signs masquerading as business-identification signs,” say a summary of the BZA appeal. 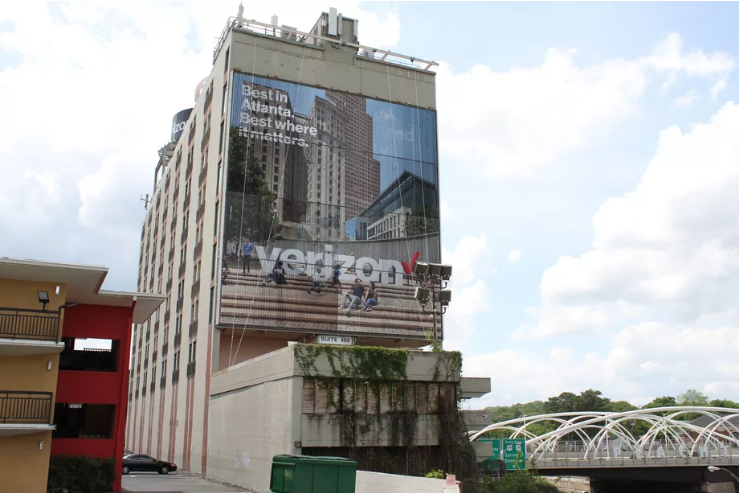 Midtown Alliance is backing the appellants. An organization rep told Curbed Atlanta this week, via email: “The signs may have been improperly permitted at the outset when they went up 25 years ago, and digitizing them would create an even more outsized visual impact on the city.”

In 1992, Tazmedia founder Taz Anderson, a former Georgia Tech and Atlanta Falcons football player, and the building’s owner sought a BZA variance that would allow them to triple the size of the rooftop “business-identification sign” from 243 to 720 square feet per sign face, according to documents related to the appeal.

In April that year, the BZA approved the variance, with a few caveats:

This rooftop sign could be no longer than 49 feet, no larger than 486 feet, and must have the same information on all three sides.

In May 1993, Anderson’s company secured a building permit for a rooftop sign.

Interestingly, the sign mentioned in the permit would be 917 feet, almost twice the size of what the BZA said it would allow.

Then, Anderson’s company took things a step further, procuring yet another permit for a wall-hung “identification” sign that would span more than 3,800 square feet—“more than 19 times larger than the size allowed,” according to documents.

The appellants now say that allowing the signs to be converted to LED light boards would be “further rewarding the sign owner’s illegal conduct.”

In a statement emailed to Curbed, Tazmedia President Geoff Anderson said, “Our company did comply with the ordinance, [the signs] were legally permitted, they did not exceed the allowed sign size, and they are legal business-identification signs.”

The appellants also assert the billboards are liable to distract drivers, even in their current form.

The building hosting the signs, which has been abandoned since a pre-recession condo conversion failed, was recently pegged for an adaptive-reuse upgrade by architecture firm Smith Dalia.

The firm planned to build on the progress from the ill-fated condo project and create more than 100 residences there.

But, according to Midtown Alliance officials, that plan “is currently stalled without any current permits.”

A BZA hearing regarding the appeal is scheduled for June 6 at noon at Atlanta City Hall.

By Sean Keenan – Curbed Atlanta
May 29, 2019
Link to original article